Our practices promote the conservation of biodiversity

More than 50 years ago, smallholders in the communities of Pital and Rio Cuarto in the Northern Region of Costa Rica began with the pineapple cultivation. They developed their own skills with varieties such as Monte Lirio, Cayena Lisa, Champaka and more recently the variety known as Piña Dorada.

The experiences in the production technique, the dedication and the quality of the pineapples harvested by the smallholders allowed the crop to spread to other areas of the country and was the basis for Costa Rica to become one of the largest exporters of golden pineapples to world level. The strong competition from the large transnationals and the appearance of a series of intermediaries motivated small pineapple producers more than 10 years ago to decide to organize and found a marketing and services cooperative for the northern zone. Consequently, in February 2006, with 56 founding producers, the Cooperative of Commerce and Multiple Services of Pineapple Producers of San Carlos was established, with the acronym COOPEPIÑA RL; located in Pital de San Carlos, province of Alajuela. The organization today has 35 pineapple producers and its fruit is exported to Italy, Switzerland and Germany under the highest quality standards.

Coopepiña R.L. establishes as an integrated policy, the moral and ethical commitment to promote sustainable production and conserve the biodiversity of its farms by adopting the international sustainable development goals (SDGs). The policy is understood, implemented, maintained and communicated to all levels of the organisation and the general public. 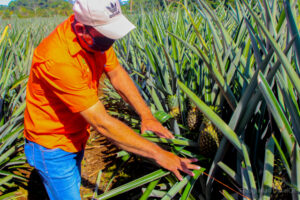