Ein Running a sustainable business is not a responsible choice, it is the only choice

In 1978, the company Fresh Del Monte settled in Costa Rica and, through its subsidiary PINDECO, launched its pineapple production based on the intensive use of technology, which completely changed the way of producing this crop in Costa Rica. After an analysis of the agricultural potential of the soil, the company began to set aside land to preserve the biodiversity of the area.
It now has more than 10,000 hectares of protected forests, some of which have been designated as wildlife refuges. In addition, education programmes for the preservation of biodiversity, species monitoring, reforestation and the creation of biological corridors are carried out. 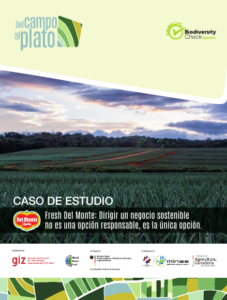